The Right of Resistance

“Most of what we commonly call women’s history is actually the history of women’s roles in the development of nonviolent action.” –Pam Mcallister 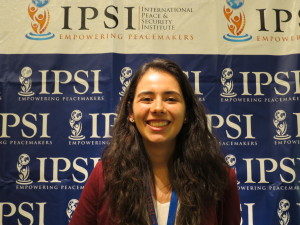 Dr. Mary E. King opened today’s session by discussing the topic of Women’s role in Civil Resistance, specifically in the use of nonviolent action. She stated that this was not a surprising factor since women were excluded from armies or any kind of institutionalized political violence –until recent years.

The first tool we studied, and the one that fascinated me the most, was creating dilemma action. Women have struggled for centuries with the preexistent roles society provides for them to fill. Placing them in a place of high esteem or ethereal value. Nevertheless, by taking advantage of these roles women have been able to challenge authority in ways that other actors couldn’t. Some of the examples we talked about where: Las Madres de la Plaza De mayo in Argentina and the Christian and Muslim Movement of Liberia.

But the dilemma action is not the only technique used by women throughout history. Non-violent movements led by women were pioneers in the use of sit-ins, silent marches or hunger strikes. As Dr. King mentioned, women’s movements all around the world have characterized themselves not only for their creativity but also for earnestness and sincerity.

As the lecture continued we were presented with a series of historical examples and figures that shaped the history of women’s and human rights. Dr. Mary King mentioned that in many cases, such as the African-American Civil Rights Movement, women have stayed in the back seat of history’s narrative, even though they were the instigators and masterminds of many of these movements. I could never do justice to all of these inspiring stories, but it made me wonder why it is that women have excelled in the art of nonviolent civil resistance? My question was shortly answered as our speaker presented us with the following five summarizing statements:

1. Women may be less targeted by the opponent’s violence, than men.
2. Women excel as keepers of nonviolent discipline.
3. Non-hierarchical organizing, tendency towards horizontal networking.
4. Women organizers tend to display fewer internal rivalries among themselves than is the case among their male counter parts.
5. Building ties of solidarity across ethnic, religious, and political divisions. 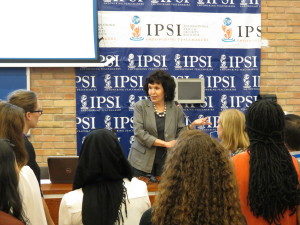 These statements portray some of the conclusions which Dr. Mary E. King has arrived at after all the research she has conducted on the topic. But a question that arose during the session stuck with me. And that is, how can women be in leadership positions or ask for equality and social change when they come from patriarchal societies?

Our speaker graciously answered that it is all about moderation and the use of creative techniques that slowly shift paradigms. This is the struggle of civil resistance in general, for it demands patience, determination and discipline. And even though social and political change comes slowly sometimes, I am optimistic that no effort goes unnoticed. As we discussed later in the day, technology and globalization have broadcast the ongoing battles of struggling societies all over the world, allowing us all to see the achievements and developments of some of these movements.