“We stumbled into a new era”

by George A. Stairs, Canada 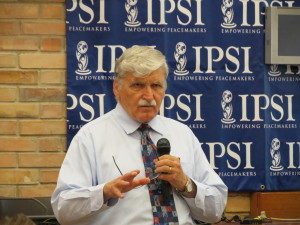 With that, The Honourable Lt-Gen. (Rtd.) Roméo Dallaire launched into his description of the “New World Disorder,” the state of affairs existing in the post-Cold War world where the previous overarching narratives and modes of conduct could no longer satisfy or prepare analysts or policymakers for the new underlying concerns and realities which began shifting in the 1990s.

And we too, those of us in the Bologna Symposium cohort of 2015, stumbled into the weighty world of conflict management in the 21st century, with the first day of formal lectures in our four week course. Both of the speakers today illustrated the complexities, challenges, and difficulties facing conflict managers and peace-builders, throwing us into the proverbial deep-end of the pool with their lectures.

We began in the morning with the keynote address from Dallaire, who covered varied topics from child soldiers (and of course the work his organization the Child Soldiers Initiative is doing), to the Responsibility to Protect (R2P) and states’ willingness to intervene, to such wide-ranging subjects as gender considerations in conflict management, the greater role of NGOs in conflict zones, and even futurism. Throughout, he imparted his lesson with all the energy, passion, and candour (not to mention Quebecois humour) that makes him such a well known and electrifying speaker and leader in my own country of Canada (although  I may be betraying my biases here a bit). One major takeaway would of course be that despite the fact that we are now almost a quarter of a century away from the end of the Cold War, the complexities and nuances that characterize this “New World Disorder” have proven to be more enduring than analysts and policy-makers perhaps had previously hoped, and that in his view, we have as of yet not created any hard doctrines to deal with such complexities. Further, the absence of these hard plans or forward thinking is having serious and dire ramifications for conflict zones around the world.

Over lunch, we had a short session from Twitterer extraordinaire Lucas Peña, who told us much about the basics and best practices of using the social-media platform and some of us promptly got to tweeting, as savvier, smarter, tech-users (interestingly this was shortly after Gen. Dallaire posed several questions about the transformative/disruptive nature of new media/technology, including “what if Google goes rogue?”).

In the afternoon, we heard from Prof. William Zartman who also warned of us the deep complexities 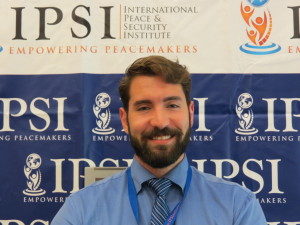 inherent in this field, and laid out the conceptual underpinnings of conflict, and the management of it. Over the course of his lectures, Prof. Zartman deftly guided us through the heavy, abstract, and certainly challenging concepts framing our understanding of the field, no easy task to be certain, but one that was carried out eloquently and with references both to mythical folktales and his own rich experience working in the field. Prof. Zartman reminded us that we must be humble in pursuing this field, to avoid allowing our own moral valuations of actors in conflict-zones to cloud our judgements, lest we lose out on opportunities to suss out what their interests really are, rather than simply dealing with the position they are portraying.  Of particular interest were his elaborations on the necessity of attempting to derive an understanding of the often misunderstood, what do opposing parties actually want (and do they actually know)? What is power and how much can which actor bring to bear, and when? And above all, what will bring belligerents to the bargaining table.

After both lecturers had finished, they generously gave their time for Q&A sessions, during which my fellow participants in the symposium asked a flurry of pertinent, pointed, and questions, all of which could in themselves constitute another blog post in its entirety (or probably more accurately, lots more). Both Gen. Dallaire and Prof. Zartman responded with in-depth, thought-provoking insights. This proved to be an exciting taste of what is to come in the next few weeks. It was an inspiring and exhilarating experience to realize I’m surrounded by individuals who share my passions and interests.powerful

In elaborating upon his earlier statement on the new era of conflict, Dallaire stated: “We’ve stumbled into something a lot more complicated than we could imagine and worse, we have no idea how to handle it.” It is certainly to be hoped (if I am not being too presumptuous in saying so), that after four weeks of learning from some of the best academics and practitioners in the conflict management and peace-building fields, we might have some of the tools to begin to attempt to address some of the questions and challenges both Gen. Dallaire and Prof. Zartman left us with.

May we be equal to the task.