Reconciliation: “We can learn a lot from the perpetrator”

Mucyo & Kelly: “We can learn a lot from the perpetrator.” As someone who has suffered such a horrific crime, we were both touched at how sincerely Kemal Pervanic said in his post-film discussion. We are approaching this topic discussion with sensitivity and care because it’s usually very contentious (understandably so). And we offer our thoughts as neither “good nor bad” not “right nor wrong”. It is a simple discussion meant as food for thought. 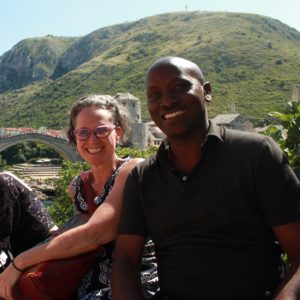 Kelly: I work with “perpetrators” of sexual violence in Canada. It’s clearly a different degree and scale of violence from BiH or Rwanda and exists in a much different rule of law context. Regardless, the people who have committed these acts are vilified and demonized by their society. So, it’s through this lens that I understand Kemal’s point and have come to realize through my work that his words ring true and that his statement needs heeding.”

Mucyo: “Giving time for the perpetrator to confess publicly in front of the victims gives him relief for internal healing. If we don’t offer this chance to him, we are putting him in a prison forever. As lawmakers or peacebuilders, we have to look beyond punitive measures and provide a grassroots/common ground solution. Communities need to own their solutions because they will create their own future rather than having an external party impose a solution. The Gacaca traditional platform in Rwanda helps victims and offenders hear each other and work together. The the perpetrator’s level of confession caused the traditional Gacaca judges to reduce sentences. By reducing the sentence time, they were even opting to release the perpetrator from prison so they could work together with victims on community projects. Perpetrators were allowed to build houses for widows as a form of reparations.”

Mucyo: “For the victim seeing the perpetrator present in front of the victim working for a common purpose, it brings hope for the community and future generations.”

Kelly: “I came to my work with offenders as a survivor of sexual violence. I recognized at one point in my own healing process that if the acts of the aggressor are not addressed to some degree, the cycle of violence will persist. As I see it in the transitional justice context, without effectively working with the offender, guarantees of non-repetition may be futile. ‘Learning from the perpetrator’ and, I’ll add, challenging and assisting in changing their behaviour is key to sustainable safe peace. From the stories of those I’ve worked with, the value of sanctioning and sentencing is that it makes the offender wake up to their crime. In this regard, prison serves a critical purpose and can be utilized as a preliminary channel for change.”

Mucyo: “Prison is a preliminary tool, yes, for other stakeholders like government, justice ministry, human rights advocates, even the victims. During the perpetrator’s sentence, we should create a platform that will enable the perpetrator to work on his consciousness. And when that happens, you want to bring something that will trigger him to confess and accept his responsibility. When this room is provided, the society will benefit much from information sharing and we will have information that we wouldn’t otherwise have; it will help us to prevent other atrocities to occur. When you have clear information about what happened from the perpetrator, you know much more clearly the root cause of conflict or the harm and can do something about it.”

Kelly: “In the Canadian model I work with, there is only one prison that has programming that provides support work for offenders. Others really don’t. But once they exit prison, they come to our group to process their offense on a deeper level. The do so with group of other people who have committed similar (sexual) offenses and have also served prison time. They are held accountable, they openly discuss the emotional, social and cultural conditions what led to the crime. They express all their emotions over time and are guided to choose and create healthier lifestyles for themselves and their community. It’s what Kemal referred to… Stories are shared about the human weaknesses, suffering and pain and the culture that initiated the chain of violence. Stories are shared about the shame, stigma and fear about re-entering into a society that they’re now shunned by. It’s very difficult to do this, but the space is there for them to reconcile deeply with themselves first and understand the impact of their harm.”

Mucyo: “I want to bring everyone working in transitional justice and peace around the world, for us to reach this noble goal and moral high ground. There is a great need to put the human being at the forefront. We need a paradigm shift and a change of mindset to bring positive, human-centred responses for the voiceless. We need to step out of theory and come down to the ground with concrete responses that truly satisfy the victims and the community in general.”

Kelly: “In a restorative justice context, we do not use the word “perpetrator” because – as a human centred approach – we see the human being first. We don’t vilify the essence of a human being, regardless of the atrocity of their act. We address the reason for offending and we create safe spaces to assist a change in behaviour. However, at the very bottom of it, each person must show the slightest degree of willingness to admit their crime, assume responsibility for their acts, and fulfill their prison time. Our program started because of the vision, humility and courage of one man to propose the idea. Then it took others to believe in the idea. Then it took the State apparatus – in one small community only – to take a chance on the idea.”