As I completed the readings in preparation for today’s case study on the International Criminal Tribunal for Yugoslavia (ICTY), I realized I knew almost nothing about the conflict. Nevertheless, after four 90-minute classes with Bill Stuebner, the gap in my knowledge was quickly filled. It was impossible to leave Clingendael today without feeling enlightened, disappointed, and overall more educated about the Bosnian War. Learning from a former soldier with an extensive career in humanitarian efforts in the region, I was overwhelmed by the compassion (and understandable cynicism) of Mr. Stuebner. His honesty about the efforts – or lack thereof – taken by the international community in response to the conflict was equal parts refreshing and depressing. 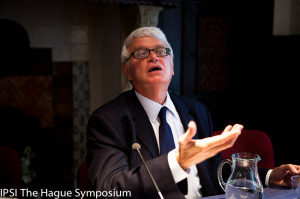 Stuebner’s account of his experiences with the Bosnian conflict provided a solid foundation for what – in my opinion – was the most important theme of the day. As he wrote in his book The Dragon Sleeps, “

[T]he first casualty of every war is the truth, and this was most certainly the case in Bosnia and the rest of the former Yugoslavia.” So much of the Bosnian story will never be told by the ICTY. As much as those involved wanted the ICTY to be the tool by which the truth could come out and the cycle of violence could be broken, the reality is that among the triumphs of the ICTY, there were plenty of failures as well.

One aspect I found troubling was the way in which investigative teams were set up to find the “truth.” Ultimately, against Stuebner’s advice, the 8 investigative teams were set up according to the ethnic identity of the accused. Six investigative units were devoted to transgressions committed by the Serbs, and one unit each for the Croatian and Bosnian violations. The problem with this setup is simple. Within a unit, if every perpetrator investigated is from one ethnic group, and every victim is from another ethnic group, then its simply human nature that leads investigators to become a ‘cheerleader’ for the victims. While nothing is wrong about the humanitarian goals of those involved with the ICTY, there was no room for the bias that inevitably resulted from the asymmetrical 6:1:1 distribution of investigative resources.

The mandate of the ICTY, as provided by the UNSCR 827, was to prosecute those who violated international humanitarian law in the former Yugoslavia. As Stuebner discussed, this mandate eventually went astray, not only wasting time and resources but limiting the fruits of such labor as well. At the end of the day, the tribunal had a problem prioritizing the international legal community and the donor countries over those directly affected by the conflict – the victims. Western justice is based on retribution – punishing people for doing things. Yet in reality justice is an abstract concept that must be grounded in the desires of the people on the ground. More than two years passed before the first ICTY conviction was released to the public in a language other than English and French. What good is justice if it takes the form of a 400-page decision that the majority of the victims cannot read?

That being said, the ICTY’s deficits provided a platform by which international tribunals could be improved upon. For example, the prosecutor’s office had been condemned for a failure to disclose evidence with the defense. This lack of disclosure was not intentional but an inevitable result of the ethnic identification of the investigative teams. The prosecutors did not know certain evidence existed – and thus must be passed on – because it oftentimes never occurred to the teams to share information. Had the units been divided according to geographic region, perhaps evidentiary material would have seemed more cross-cutting and thus communication across units be more central to the prosecuting process.

The failures of the ICTY are certainly disheartening. Despite the genuine efforts of humanitarians like Stuebner, three versions of the truth have emerged in Bosnia, three histories that may serve as another source of contention to be fought over in the future. While I think many of us already feel cynical about the effectiveness and future of international justice mechanisms like the ICTY and the greater ICC, such pessimism will hopefully propel future peacebuilders to do peacebuilding better.