Refreshing Perspectives at the Half-Way Point

July 24 began with a site visit to the Special Tribunal for Lebanon. It began like any other introduction to a tribunal: the logistics, the courtroom, and the cases before the Court. I slowly realized, however, that there were some differences between this tribunal and the International Criminal Court that we visited last week. The starkest difference was the mandate of the Court and the rules to which it adhered. The STL has a very specific mandate and its jurisdiction is to only apply Lebanese domestic law. The most memorable thing for me was not the structure or the mandate of the Court, but the people we met and the conversations we had. It was admittedly refreshing to hear representatives of both the Office of the Prosecution and the Defense team speak so honestly and engage so vibrantly in talking about the limitations of the Court and the reality of the structure of international criminal law. The conversation extended from the evidentiary limitations to why the UN Security Council chose to create a tribunal about the assassination of Rafic Hariri and not for other more severe crimes committed in recent history. The response was a realistic and honest one on the part of both the OTP and Defense representatives that acknowledged their own limitations, as well as the political implications of the international legal system.

While this was similar to conversations that I have had in the last two weeks on a number of different occasions with my colleagues, it was not something I imagined to hear from someone who worked in the Court. In a symposium focused on the post-conflict transitions and international justice, it is important to recognize the limits and factors that control the system we operate in, as well as the political realities that exist within that system. 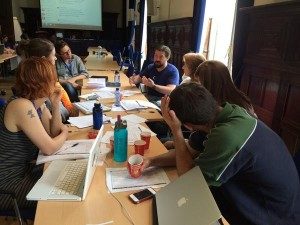 Justin Richmond, an embedded analyst with Palantir Technologies, led the second half of the day. His focus was on stabilization in societies that experience disaster. After a brief introduction into his work, we were split into groups for the first part of our simulation that was modeled on the typhoon that hit the Philippines in 2013. My group was focused on Food Stability in the month immediately after the typhoon hit. This was very challenging, even after Justin took the time to describe the way we should approach the issues. The hardest thing for me to do was abandon my assumptions on so many of the local issues that we had to address, as this would likely mean that my solutions would assist my reality rather than the reality of the people in the situation we were dealing with. The simulation has been telling of just how much the international community overlooks the issues that are the most relevant to the communities most affected, and how difficult it is to reconcile this in disaster zones.

If I could reflect more personally for a moment, we are now about half way through the program. Temporally, it does not feel like it at all, but thinking of all the things we have done and the issues we have been exposed to, it is easy to believe. I have learnt more from the people around me in the last two weeks than I could have imagined. All these people, each from a different background, have so much to contribute to this experience and have their own stories to tell.  When I leave this place, I leave with new stories, new attitudes, and new friends.