Reconciliation: Who is it for? 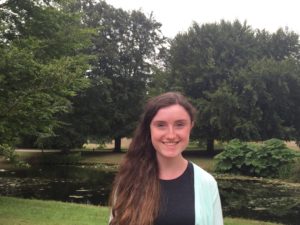 an “obvious objective” and perhaps even the main challenge to rebuilding communities after conflict, the victims and survivors of conflict often view reconciliation programs—and in particular, those instituted or encouraged by outside actors—with bitterness and disdain. As a result, money is often poured into reconciliation efforts that are doomed to fail and perhaps even counter-productive. Dr. Valerie Rosoux, the incredible speaker tasked with beginning our third and final week of this symposium, began her discussion of memory and reconciliation with these parameters; however, she also emphasized that reframing memory and facilitating reconciliation were not impossible tasks. 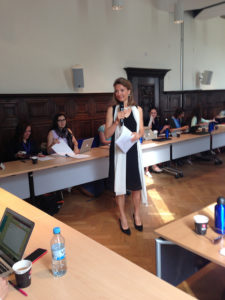 In order to help us work through how and when to incorporate each of these ideas, Dr. Rosoux placed three categories of reconciliation on a continuum based on their intended outcomes. Structural reconciliation, which prioritizes security, economic interdependence, and political cooperation, occupied the left side of the scale, as it was closest to a “minimalist” approach. Spiritual reconciliation, which focused on the collective healing of both victims and perpetrators, was placed on the far right side of the scale as it represented a “maximalist” approach. Psychosocial reconciliation occupied the space in between the two extremes, as it emphasizes the building or rebuilding of relationships between parties.

The approaches don’t have to be at odds, however, and as we delved into the scope of reconciliation and its impact on memory, it was clear that both memory and reconciliation are fluid and multifaceted.

Memory can be individual or collective, official or unofficial, and anywhere in between. Narratives are inherently dynamic—some are more acceptable or popular than others, and some are controversial but still institutionalized. Nowhere is this more prevalent than in historical narratives and historical memory. In the context of               active conflict or in relation to past conflict, memory is especially contentious because of its potential to perpetuate, create, or mitigate animosities.

Reconciliation efforts can also perpetuate, exacerbate, or mitigate enmity—particularly if victims or survivors view such programs as an oversimplification of a complex problem. It is vital to ask who reconciliation programs are meant to serve—victims and survivors, the communities affected by conflict, and/or the international community.

Although outsiders often view reconciliation as a key priority post-conflict, other needs—such as security, economic access, and basic services—are usually considered to be more important by the local population. Furthermore, not all survivors and victims are ready or willing to participate in reconciliation processes, which can be considered a crossroads at which more guidance or coercion is necessary for those resisting reconciliation. However, the notion that there are “good victims” who cooperate and reconcile or forgive, and “bad victims” who refuse or are unable to do so, is not only unfair, but may also do a disservice to those attempting to build social trust in communities.

Perhaps one of the most important limitations of reconciliation is the term itself, which implies the repair of a previously positive relationship and excludes so-called “bad victims” who are unwilling or unable to engage with the process. My biggest takeaway from Dr. Rosoux’s lecture is the fundamental idea that reconciliation is not for everyone, and we therefore must stop treating it as though it is a panacea for a host of ills.

Dr. Rosoux used a poignant quote to illustrate the tensions surrounding reconciliation: “The truths we are looking for are actually butterflies; in trying to fix them, we kill them.”